Caroline Horne, over delivers in her Promo slot with an awesome story!

At our Ipswich event in September, our corporate photographer, Caroline Horne jumped up to give her 60 seconds in a far more exuberant way than we are used to. Caroline will be the first to admit that years ago Caroline would have happily hidden behind the camera! We love to see that level of confidence grow at the BWN and we love the story that followed, we hope you love Caroline’s story too….

“Most attendees at The BWN already know what I do for a living. It’s pretty obvious. That statement necklace is my camera. If it would be quite a nice piece of jewellery if it wasn’t.

The weeks go by fairly rapidly between each monthly networking meeting and once again I haven’t prepared my sixty seconds as I still hope that I’ll just blend in to the background and not get spotted. Needless to say, that doesn’t happen so, once again I’m standing in front of a group of business woman, knees knocking together, telling them  I can do corporate head shots, family photo sessions, the odd wedding and some product photography or flashing up a local magazine with one of my pictures in it.

So, it’s a new day of the week and new location for Ipswich. Let’s dare to be a little bit different and a bit daring, well for me anyway. The journey begins….

(You can read this as if you were the older Rose in Titanic) It was 21 years ago today, the teacups had never been used, it was called the journey of dreams. Rewind… no, it was 21 years ago in September, the country was trying to come to terms with Diana’s tragic death. Her funeral was looming and there I was standing in York Minster, in front of my proud parents looking very hungover in my mortar board and gown. Shudder the thought, I was the second member of our entire family to get a degree. I was awarded a BA (hons) in Design and Technology with Art. It was a combined degree which also meant two dissertations, a lot of practical work and turning up for lectures. I had specialised in Jewellery Design and Manufacture and Printmaking. Both of which meant I had to be in the workshops and no hiding in the “library”. York at the time had 365 pubs. What a choice!

Design and Technology wasn’t technically my chosen degree of choice. I had been to art school and my love of photography started along time before this. I always had a camera on my Christmas list. A Boots brand 110, the one with the funny cassette film which went on the school trip to Italy in 1988 and took some very hazy pictures of Mount Vesuvius. Often or not the pictures had one of those lovely oval stickers Boots would carefully place slap bang in the middle of your prize photograph advising  you, you had  taken an absolutely cr*p image!

Not one for giving up, I had been finally left a decent camera. My first Canon, and it weighed just as much as a cannon too. I lugged it everywhere with me, I had won the school Photography Prize and it got me through Art School however there were 8 of us applying to Nottingham to do the same photography degree. They may well have drawn straws as to who got in! Travelling to London to interview and write about a newly qualified photographer who worked for Monsoon and later went on to win the Travel Photographer of the Year award didn’t even help. I was absolutely heartbroken. I spent the Summer of ’94 picking apples for a living and needed to do something…

Lots of paperwork later I was offered an unconditional offer to do Design and Technology with Art. This is the science bit. I actually needed Physics and Maths A-level to get onto the course, neither of which I had got because I wasn’t particularly academic at school but I could use a soldering iron and make a metal detector.Very important life skills!!

With the Uni bit done, dusted and qualified I got my first proper job, as a jeweller. Sounds glamorous doesn’t it?

I was making silver nurses belt buckles every day of the week and also resizing wedding rings. I had upgraded from a soldering iron to a blow torch. I was also working for a refrigeration design company which was pretty dull unless you wanted to know the ins and out of a supermarket refrigeration unit. But, I had lived away from home for 3 whole years but had ended up living with my mother who often shouted at the back of my head, “when will you be home?”

“Late was the usual reply, don’t wait up” Damn, that flower pot hurt as i stumbled through the door. I needed a place I could call my own. Nursers belt buckles wasn’t going to help.

Let’s quit that and work for an asset finance company. We sold a well known footballer his first Porsche Boxter, and took his old SLK on a bit of fast spin. I came clean to him only the other month whilst I was photographing for Fresh Start New Beginnings’ (The BWN Ipswich charity of the year for 2018/2019) charity tea event.

I missed the jewellery though and ended up at a nicer high street jewellers and travelled around the East of England as an roaming manager and supervisor. Retail is hard especially at Christmas. Dad said I looked green one year as I was shattered. I wanted my weekends back. So from playing about with diamonds for fiver years, my next position was even more glamorous.

Wow! This was it! I had hit the big time. I was selling articulated lorry loads of the stuff around the whole of the UK. I had gone from diamond sales to compost. Where there’s muck there’s brass they say. I was also selling landscaping barks and supplying the likes of Chelsea and Hampton Court Flower Shows. Ask me a question about compost and critical fall heights and I can stun you with a wealth of interesting information.

You might have guessed by now, I had talked for more than my allocated Sixty Seconds 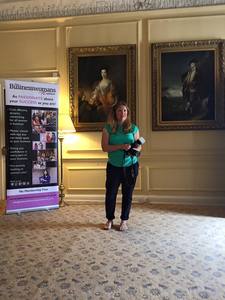 plus I had almost worn a hole in the carpet. I can walk and talk at the same time. Mandie was also watching me. I think she was shocked!

Forward-wind 12 years. December 2015. I knew I was going to leave since returning back from maternity leave the second time. I had married a Royal Engineer who retired after 24 years of bomb disposal who was away a lot, some of the time even I don’t know where. Anyway, my director called me in  to his office. I kind of guessed what was coming judging by another colleagues face. I was up for the chop. I couldn’t progress in my role unless a director was going to leave. I had given up.

A friend that summer had said to me why had I given up photography. I hadn’t really. Just didn’t think I was good enough. What if the film didn’t load properly? What if I had stupidly processed the film with the lights on? The risk for me was too great. Digital was a game-changer. My husband thinks I’m having an affair with my camera. So when they told me I was being made redundant I was secretly quite happy as I had already got the ball in motion and I had been there for 12 years. 12 years and you know what that means!

My website went live the day after gardening leave finished, I went on training courses to refresh my technical capabilities. I hadn’t used many of the digital processing packages so had to learn about that too. And, there we have it, my 21 year roundabout journey to finally doing what I had set out to do. 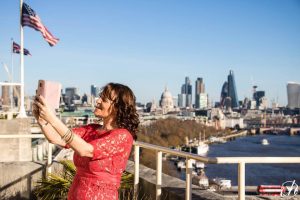 My picture from The BWN’s Founder (Mandie Holgate) book launch next door to The Savoy and featured in lots of newspapers!

Becoming The BWN Ipswich corporate photographer also came at the right time, I remember seeing the message whilst we were driving back from visiting Dad in Wales. I had a bit of signal between the mountains and said I would photograph the Ipswich event. If it wasn’t for BWN I wouldn’t have photographed Mandie’s book launch, thanks Jayne Lloyd for being busy the day before. Have my work featured in a variety of publications and met a huge amount of valuable contacts who have all helped me develop my goal further and who have become friends.

As you can see we LOVE to see how even our coordinators and photographers grow and love who they are, no comprise, no change, just true confidence to turn up and be yourself to get the business results you want.

Give us a chance to see how we could help you, although maybe don’t go over your 60 seconds or we could be there a while!

Thank you Caroline for sharing such a fabulous journey into business. If you have a Golden Ticket you can write for the BWN blog and feature in our online marketing including our newsletter any time. We would love to be promoting you and hearing your interesting, relevant and useful ideas for our readers. Not got a Golden Ticket? Learn more here.

And if you hate 60 seconds we have an online course that could fix that!

Even Our Corporate Photographers Love Us!

We work hard to support our business women and that is why we created The Insiders so we could keep that level of motivation, support and assistance every day. We also do our best for our venues, speakers and our photographers.

Check out this gorgeous testimonial from Caroline Horne.