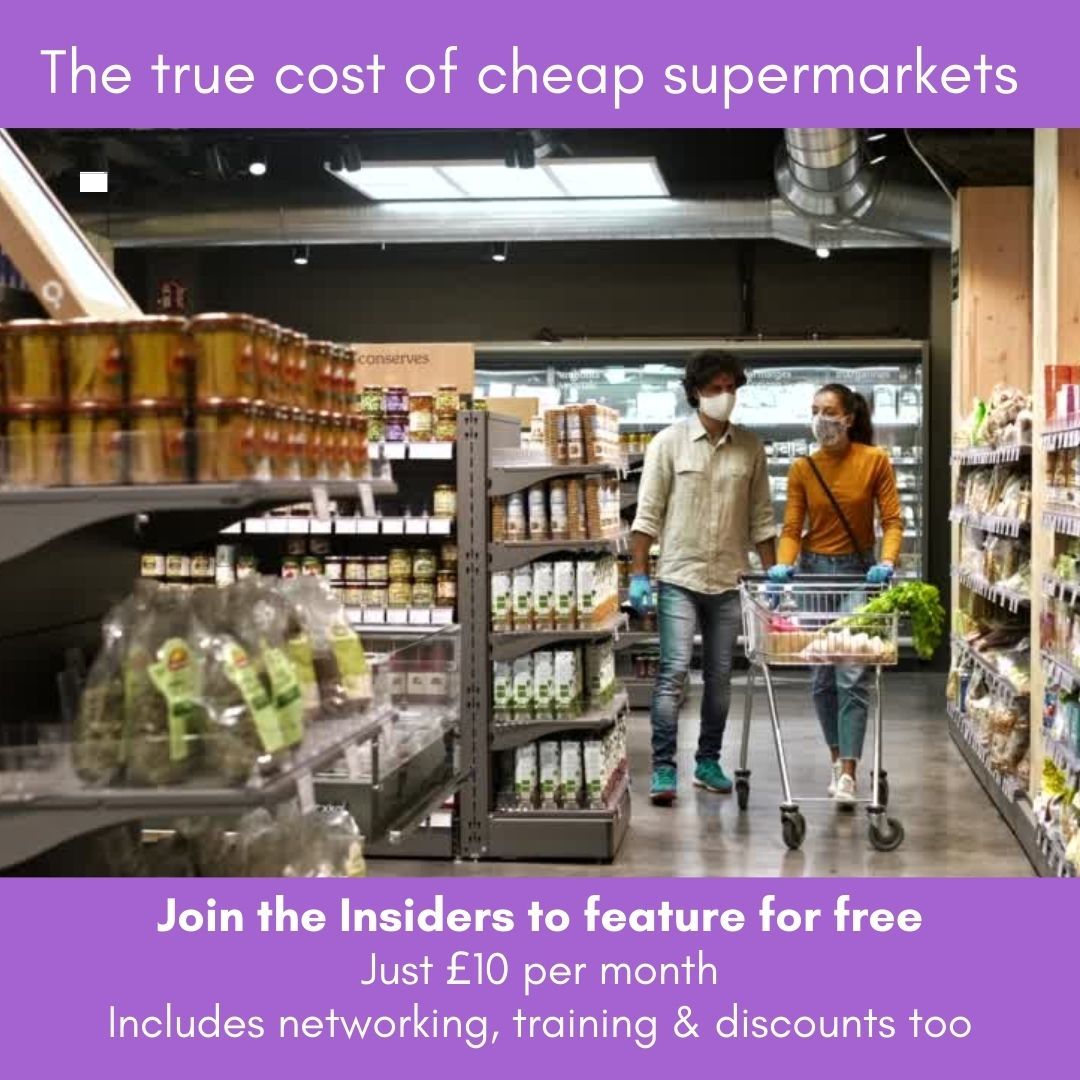 The true cost of cheap supermarkets

Insider and BWN Business owner Paul Boorman, is a top masterchef of Great Britain, a highly successful award winning Executive Chef with a demonstrated history of working in the hospitality industry and an interactive member of our matermind group. We all have expertise over on the INsiders and as business owners we are all happy to support one another.

Here Paul outlines some very unsavoury facts about your local cost saving super market. If you are eating, you may wish to stop!

If you are a business owner, you may wish to share this post and shout about what Paul has to say.

Let me pose a few situations that I can’t quite get my head round.

During Covid lockdown times a pub was not allowed to sell alcohol either on premises or to takeaway. Millions of pints of beer and other drinks were poured away with no recompense from the Covid Support packages. With all Covid precautions in place it was perfectly feasible for a pub to sell cans, bottles, and containers of the nation’s favourite tipples outside with social distancing and contactless payment all observed, but this was not allowed.

The bastions of social gathering and lubrication with a history older than the USA were held out to dry, whilst supermarkets whose often used tactic of selling beer cheaper than its cost price was allowed to have several hundred people inside at the same time all clamouring for toilet rolls and bottles of wine.

Pubs were allowed to sell food, but not alcohol… To suggest that there might have been some closed-door discussion about the Big Business guys taking advantage of their connections to ensure that they had a monopoly on supplying the dramatic increase in consumption of the countries favourite legal drug would be pure speculation.

Pubs weren’t even allowed to deliver alcohol but one of my strongest memories of driving on the eerily deserted roads during Lockdown 1 was the number of supermarket delivery vans out and about. As I said, I don’t believe that the pandemic was intentional but Big Business certainly took advantage of training the population to have everything delivered to their door, to the exclusion of small independent traders who just couldn’t compete. ‘But they can always use Deliveroo, Just Eat and the like’ I hear you cry (not really but I’ve always wanted to write that line).

Which brings up another concerning fact. When you watch the adverts for Just Eat they only mention the Big Business brands such as GREGGS, MacDonalds etc, never that you can get your local Joe’s Burgers, or Blackcurrant Bakery sausage rolls. Unremarkable you may think in and of itself, but it falls in a different shade when you compare the fee percentages that Big Business pay to use the platform compared to small independents.

The like of KFC, MaccyD’s etc will pay somewhere in the region of 8-10% perhaps a little more, maybe a little less whilst Joe’s Burgers will pay between 30-35% for the same service.

But is it even the same service?

Take a look on these apps and see which business are consistently promoted front and centre. Big Business with the highest profit margins paying the least fees whilst the small business are paying crippling fees just to compete. But that’s a level playing field and therefore nothing to complain about, isn’t it?

So Big Business bring more business must surely be the answer to the discrepancy in fees, although I doubt that the amount that small places get charged makes up the difference.

But supermarkets give us convenience don’t they, and with their ‘price wars’ we get great value for money don’t we. Far cheaper than the little shops who charge far more aren’t they!

Sadly, many people believe this, and we have certainly seen plenty of fish and veg mongers, butchers, hardware stores and corner shops disappear from our declining high streets.

So what is the true cost of this ‘convenience’?

Well, the easiest answer is quality of the goods we buy, especially fresh food goods.  I recall having a very strange discussion with a very smug supermarket manager last year. I had bought 3 packets of chicken wings late one night on the way home from work. The following evening, I decided to marinate them ready for the BBQ and whilst they were all in date, the packet with the longest date on them had ‘blown’ overnight. This is caused by hydrogen sulphide that is produced by the decaying meat. I foolishly pierced the packing and immediately regretted it. The stench was retch inducing.

So, I decided to return to branch of this supermarket which is actually one of their flagship stores. Eventually the manager agreed to meet me as I refused to leave and told everyone why I was there. To cut a long story short I spent 10 minutes listening to the most incredible claims by the very smug manager. According to him not only was he not going to inform anyone (Environmental Health Officers was my suggestion) about this issue, but he also informed me that supermarkets are allowed by agreement with the government to sell an ‘acceptable’ amount of food not fit for human consumption!

I will say that again. Supermarkets are allowed to sell food unfit for human consumption.

When I commented that people could get ill, he told me that people overcook food anyway so it would be fine. All he had to do was offer to buy the food back. He then pointed to the fish section saying that none of the fish was fresher than 3 months old and he certainly wouldn’t buy any of his own fruit and veg! The fruit and veg is stored in massive warehouses kept at the exact sub-zero temperature that preserves the product without actually freezing it.

Ever wondered why the fruit and veg goes off so quickly when you get it home? That is 3 months of decay catching up literally overnight.

What is the true price of your weekly shop at the supermarket then?

Is it as cheap as the till receipt says? Well, factor in the amount of fruit and veg you throw away and the true cost starts to increase. Check the added ingredients in your pork shoulder roasting joint, ‘added water’? That’s going to change the price per kilo price isn’t it. You only want 2 chicken breasts, but they come in packs of 4?

It is useful to remember that a large corporation has a different time scale perspective as well. Small businesses are normally owned by one or two people and so have a time view of a few years at a time. Certainly not beyond retirement age of those concerned. Big corporations are run by a board or similar and have timescales of decades. They can be patient, slowly squeezing the little businesses out with their pricing and ‘convenience’.

However, truly the saddest part of all this is the unseen cost to the local area. Profits and taxes from Big Business go out of the area. The profits go to head office and get spent by those in control on yet another holiday in the Maldives, maybe not entirely accurate but you get the idea.

The ratio of taxes they pay is miniscule per pound taken compared to the taxes paid by small business per pound. The local rates are often heavily subsidised by the council just to have the privilege of yet another chain coffee shop, whilst small business gets clobbered to make up the shortfall.

But think of all those local jobs! Not really..If the small coffee shop was busier they would need more staff, as would that local butcher or veg shop. When was the last time you saw an independent Off License? The jobs are created where ever you shop. Let that sink in.

The very saddest part is that the owner of that small shop that you choose not to shop in lives in your neighbourhood, their kids go to the same school as yours do, they pay council tax, local rates, shop locally keeping their hard earned money in the very local economy. They even raise money for local charities! But only for so long as they can keep their business open, and for that they need customers….”

A powerful article on the true cost of cheap and it’s damage to our towns and cities. Every consumer can make a difference. As we see more high profile people get away without paying fairly their taxes, remember SMEs account for three fifths of the employment and around half of turnover in the UK private sector. Total employment in SMEs was 16.3 million (61% of the total), whilst turnover was estimated at £2.3 trillion (52%).

Time to rethink your shopping habits?
If you buy local and talk about it on Instagram great tags to use are #supportlocaluk #smallbusinessuk #supportsmallbusinessuk and don’t forget to tag us – @https://www.instagram.com/thebusinesswomansnetworkuk/

All Insiders can be published on our site free of charge. To learn more click here.